Did you know that the run avatars in our advertising campaign represent real people who have been affected by breast cancer? Real people who will never stop running, even in these unprecedented times.

This year’s CIBC Run for the Cure will include both online and real-world elements. That’s why we’ve brought our campaign heroes to life as avatars, through our one-of-a-kind virtual experience. Read more about their inspirational journeys below.

Coming soon, you can create your own run avatar! Build your avatar using our refreshed mobile app and unlock fun accessories by achieving fundraising milestones. When you share your avatar on social media, you too will become a campaign hero. On Run Day, while you run or walk in your neighbourhood, your avatar can run alongside you every step of the way. 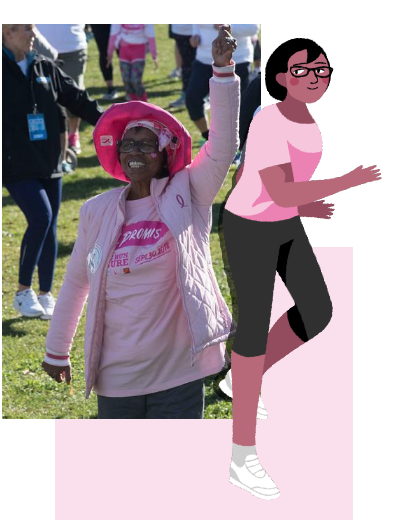 Bernice Arsenault was diagnosed with an invasive form of breast cancer in 2001. She immediately underwent surgery to remove the lump and daily radiation treatments to prevent the cancer from spreading. The treatment was a success and since then, Bernice has been an advocate for the breast cancer cause and the Canadian Cancer Society’s CIBC Run for the Cure. As a self-described “energizer bunny” from Cole Harbour, Nova Scotia, her determination in raising funds is undeniable — she doesn’t take no for an answer when asking anyone and everyone for donations. This perseverance has enabled Bernice to raise an impressive $246,500 and counting for the breast cancer cause. 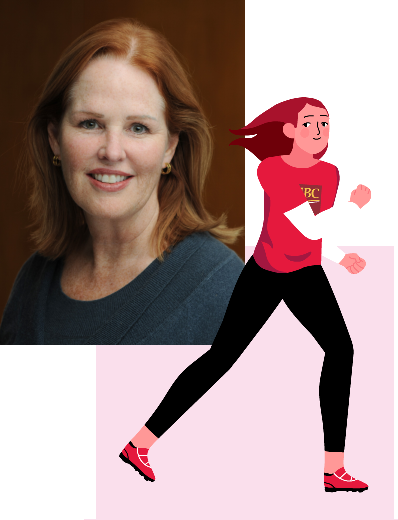 Clare Dennis tested positive for breast cancer in May 2006. It took 3-4 months of continuous biopsies and various surgeries to identify and define this extremely complex, but positive diagnosis. During this time, Clare was told to put her papers in order and prepare for the worst. In August 2006 she underwent bilateral surgery to remove a 13cm tumour and had immediate reconstructive surgery during the operation. Clare has never looked back and has been cancer free for 14 years, 2 months! She is living testament of how cancer doesn’t stop someone’s commitment to supporting the cause, by setting up a fundraising page for the CIBC Run for the Cure during her recovery. 5 weeks post major surgery, Clare joined the Run, albeit a little wobbly, and together with 30 family and friends, joyfully walked the Run. As a CIBC employee, Clare’s passion is endless by leading CIBC’s charity Golf Tournament that raised $75,000 in support of the Run. As she puts it “I am in this for the long run!” 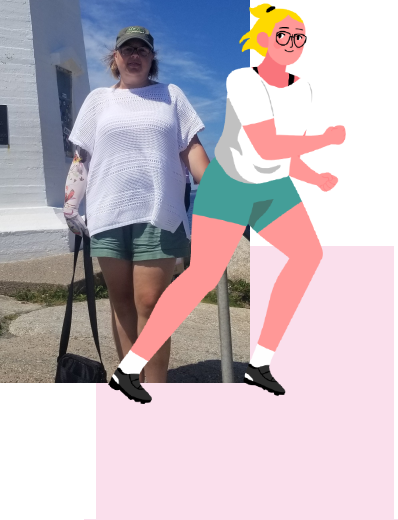 Jordana Buchan was diagnosed with Stage 4 breast cancer in 2012 and found out it had already spread, or metastasized, to her lymph nodes and spine. To stabilize her condition and prevent further spreading, treatment was the only answer. As a wife and mother of 2, Jordana has been participating in the Canadian Cancer Society CIBC Run for the Cure for the past 2 years with her team “Count Me(ts) In,” — a team of almost 100 individuals in Regina, Saskatchewan who are living with Stage 4 Metastatic Breast Cancer and their families and friends. Together, they raise awareness and funds to specifically support metastatic breast cancer research. Jordana feels connected and is proud to be part of the Run by contributing to the Metastatic Futures Fund. Her hope is to ease and extend the lives of those with Stage 4 Metastatic Breast Cancer. 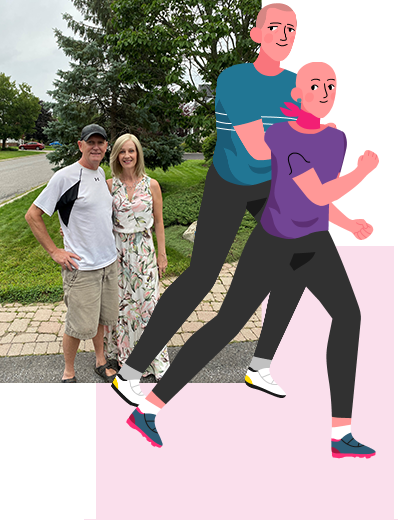 In 2011 Julie Booker was diagnosed with breast cancer. A mother to 4 children and wife, Julie was determined that their family life be impacted as little as possible. She lost her own mother to breast cancer in 1987 and had seen firsthand how terrible this disease could be. However, thanks to research, treatment today is incomparable to that in the 80’s. It’s that research, why Julie is alive and is such an advocate for the cancer cause. Julie is drawn to helping with those with cancer, and has founded her own mobile wig fitting business, Wig Stories, as a way of giving back - “I truly believe that the reason I had cancer is so that I can help people during their own journey.”

Her very first connection with the CIBC Run for the Cure was in 2011 when friends ran for her in a team called Julie’s Jugs! She is honoured and privileged in promoting the team, “Anything that I can do to promote fundraising and further research that will save another life…I'm there.” 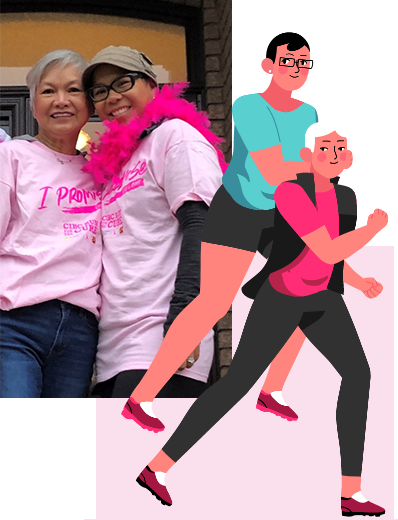 Despite some reservations, Alma decided to forgo surgery and move forward with oral treatment. 10 years later when the cancer returned, she underwent chemo, radiation and surgery. Now fully recovered, Alma looks at life as a true blessing. She enjoys spending time with her husband, kids and grandkids and continues to work part-time, sharing her positive energy with those around her.

Margarita took her first breast cancer diagnosis head-on by having a mastectomy. A year later, she had a preventative mastectomy to lessen her chances of a recurrence. Despite taking these measures, she was diagnosed with Stage 3 breast cancer two years later. With chemo, radiation and hormone therapy, Margarita’s breast cancer is now under control. Even with the challenges of cancer, Margarita continues to have a positive outlook on life, making the most of every day and feeling blessed surrounded by her loving husband, three silly kids, big crazy family and generous friends.

Margarita and her family have been participating in the CIBC Run for the Cure since 2003 when she joined as a runner but became more involved when breast cancer started affecting their family. In 2018, she started team “#wearestrongertogether.” With breast cancer so prevalent in their lives, they lean on each other for support and understanding. As Margarita says, “breast cancer has brought our family and friends even closer together, and now we’re more appreciative of the simple needs and aspirations of life.” 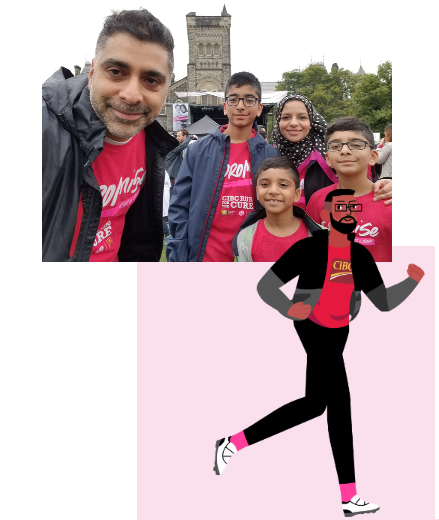 Burket Khan’s introduction to the CIBC Run for the Cure was 24 years ago when his bosses boss asked him to participant. As an employee of CIBC, giving back to the community is fundamental for him, both professionally and personally. Burket takes fundraising seriously reaching out to his network, as far as the UK, every year. The cancer cause is important to him with his father’s passing with esophageal cancer, and his mother-in law and dear cousin’s encounter with breast cancer — both who are survivors. This year marks Burket’s 5th year in a row participating in the Run. At first it was just him and his oldest child but now it’s a whole family affair with his 3 kids and wife. “I have been blessed with my life and I feel like it’s my obligation to give back. I want to teach our kids how important it is to help those who are or may in the future, face challenges in life...one day it could be one of us.”

Ready to get started? Find your Run.