Our website will accept donations until December 31. Thank you for continuing to fundraise in support of Canadians impacted by breast cancer.

This past year, CIBC contributed $133 million in corporate and employee giving contributions to more than 4,000 charities, non-profits, and community organizations that are the backbone of communities across North America, including the Canadian Cancer Society, which helps deliver timely and much-needed support programs and services.

Through its unwavering support for more than 25 years, CIBC and its employees have helped us grow the Canadian Cancer Society CIBC Run for the Cure into the largest single-day, volunteer-led event dedicated to raising funds for the breast cancer cause in Canada.

CIBC’s involvement with the Run started at a grassroots level in support of a colleague with breast cancer. Recognizing the passion its employees had for this cause, CIBC became title sponsor in 1997 and has never stopped running. Since then, CIBC clients, employees, their families, and friends have raised more than $58 million through pledges, fundraising efforts, and events.

Each year, members of Team CIBC, led by a group of passionate volunteer Run Champions, join thousands of Canadians in helping to change the future of breast cancer through their participation in the CIBC Run for the Cure in communities across Canada. 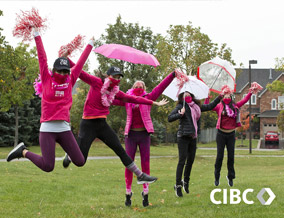 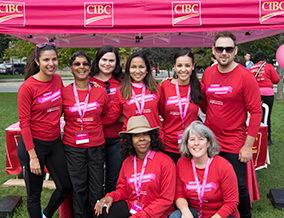 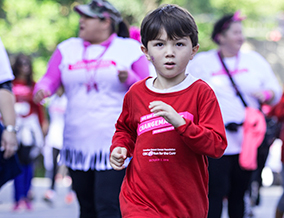 Canpar Express is the official courier and a long-time supporter of the CIBC Run for the Cure. Canpar Express’ fleet of Run branded trucks is proud to facilitate the delivery of hundreds of thousands of items to Run locations across the country each year. On past Run Days, Canpar Express trucks and volunteers have generously helped with water distribution, baggage check, and route marking. We are proud to continue our support for such a wonderful cause.

The Printing House (TPH®) is a proud national sponsor of the CIBC Run for the Cure. The TPH® Charitable Office has provided aid in health care and education, especially for women and children across the country, for over 30 years! As a proud Canadian-owned and operated company, emphasis is placed on providing support to the communities where we conduct business. TPH® employees, friends and family are excited to walk and run for Canadians impacted by breast cancer on Sunday, October 2, 2022.

Join or follow along with Team The Printing House

WestJet’s caring culture extends beyond their aircraft and airports and into the community. As a proud supporter and the official airline of the CIBC Run for the Cure, WestJetters, their families and friends from across the country are proud supporters of the breast cancer cause. On Sunday, October 2, they will walk and run to raise funds for breast cancer research and support programs and services for people impacted by breast cancer.