Welcome to my Fundraising Page 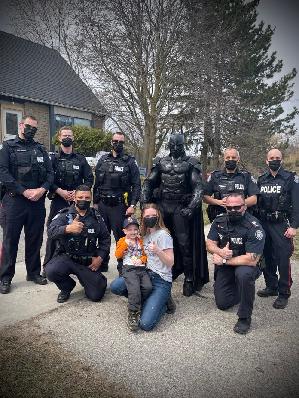 Hello everyone, I am participating in Virtual Head Shave to support the mission of the Canadian Cancer Society.

This year I’m shaving my head for my little brave friend, Parker, who was recently made a Junior Police Officer and got to meet his hero, Batman. Little Parker is 5 years of age and has a rare cancer called Ewing Sarcoma. He received medical treatment; however, Doctors were forced to amputate his right leg. The little guy handled it like a real champ and stayed positive throughout all this displaying the biggest smile from ear to ear. In January 2021, it was revealed that he was finally cancer free. He rang the bell at Sick Kids Hospital and went home.

However, on March 17 2021, his parents received terrible news; Parker’s cancer had returned and this time, it was incurable. The cancer has now spread around his skull, under his eye, in his jaw, in his left leg femur, fibula and tibia. Also in his pelvis, sacrum, sacroiliac joints and his arm.

Parker has demonstrated that, even at a very young age, one can overcome extreme obstacles and enjoy every breath of life. His resilient attitude and joyful spirit serve as an example to me and all those who have been fortunate to meet him.

He has touched my heart and shaving my head this September for him, is the least I can do. Please think of Parker and pledge what you can. Even small amounts make a big difference.

Please help me reach my goal

Thank you to my donors!

Your dollars at work

With your support, we’re helping people live longer and enhancing their quality of life.

We are the largest national charitable funder of childhood cancer research