There is no doubt this is an unfortunate situation as 2020 Daffodil Dash | Vancouver is not only a much-anticipated event but also a meaningful way for people to show their support for the cancer cause.

In spite of 2020 Daffodil Dash | Vancouver not taking place for now, we are encouraging you to please continue to show your support. Please make a donation online today and support our critically needed activities. Thank you. 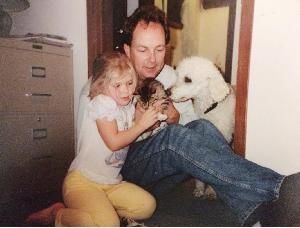 In November of 2005, my dad was diagnosed with AML – acute myeloid leukemia. AML is a cancer of the blood and bone marrow. This type of cancer usually gets worse quickly if it is not treated. Unfortunately the cancer was caught very late and the doctors said he only had two months to live unless we found a bone marrow match. Most patients have a 25% chance of a sibling match; the rest rely on a volunteer donor from outside their family. Sadly none of my dad's siblings were a match.

My dad was admitted into the hospital immediately to begin treatment. He stayed in the hospital for months. In March of 2006, he was finally released. I remember he was so excited to be out of the hospital; he instantly organized a family vacation to Florida. A few months later, I was invited to attend Relay For Life, a fundraising event in support of the Canadian Cancer Society. Even though my dad was still recovering, he joined us for a few laps around the track. Our family lit a luminary in honour of him. In that moment, I experienced the true magic of Relay For Life.

Unfortunately my dad's cancer returned and it was more aggressive. On December 13, 2006, he passed away, just two days after his 50th birthday.

The following year I participated in Relay For Life again. This time, I lit a luminary in memory of him. Year after year, our team's line of luminaries grew. I couldn't believe how many people were being affected by this disease. Throughout highschool, I organized all sorts of fundraisers to raise money for the Canadian Cancer Society (CCS). It wasn't until my final year of high school that I realized I wanted to pursue a career in non-profit. I moved to Vancouver in 2010 and enrolled myself in an Event Management program. I started volunteering with the Canadian Cancer Society and joined the Relay For Life Vancouver committee in 2013 and the inaugural Daffodil Dash committee the following year. In 2014 I accepted a position at CCS and I've been working here ever since.

A couple of years ago, I attended a Daffodil Month event in April. We had three panel speakers share their stories – a researcher, a volunteer and a cancer survivor. The survivor, just a teenager, shared her cancer journey with us and explained how she was diagnosed with AML as a child. I got goosebumps. Although her treatment was very aggressive, she was fortunate to find a bone marrow transplant donor. The transplant itself nearly killed her – she slipped into a coma and her family members were preparing themselves for the worst. Yet there she was, standing in front of us, sharing her story. When I think of the impact we're making at the Canadian Cancer Society and how the funds we're raising are making a difference, I think of this story. Our research is progressing. Our treatment is progressing. To see someone in the flesh, survive the exact type of cancer that robbed my dad's life over 10 years ago, was very inspiring. It brought me hope.

Please show your support and help me reach my fundraising goal. Give what you can – every dollar helps.

With your help, we can prove that together, we are bigger than cancer.

Use your social media login