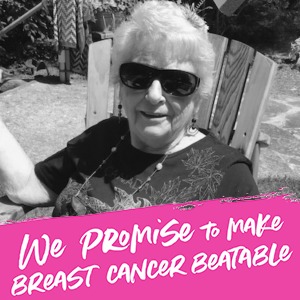 As you know, my daughter, Katherine, was diagnosed with a rare and aggressive breast cancer in the January, 9, 2013.

I am participating in the Canadian Cancer Society CIBC Run for the Cure on Sunday, October 4, 2020, in London, Ontario.  I would appreciate very much if you could sponsor me in the Run for the Cure for breast cancer research. This will be the seventh run that I have participated in.  We need research to continue and to find a CURE now.

Over the last five years, Team Katherine Butson has raised just over $168,000 for the Run for the Cure.   Katherine continues to remain on Long Term Disability as she struggles with several side effects from all her treatments and being misdiagnosed 3 times. It still haunts her that she received the diluted chemo, as they will never know exactly how much chemo she actually received and whether it killed the cancer. Katherine is now fighting Post Traumatic Stress Disorder.

We were the team to raise the second highest amount of money in 2013. The Canadian Breast Cancer Foundation announced that we were in the top 10 Friends and Family teams in all of Canada!! Katherine was also invited to observe a panel of experts, in 2014, at the CBCF headquarters in Toronto discussing grant applications in order to determine which researchers would receive funds raised by us and all those who participate in the Run for the Cure to help women just like her, who pray daily for a cure.

Last year we were once again the Top Friends and Family Fundraising Team. Three years ago,we were named London's Top Friends and Family Fundraising team and Katherine was named London's Top Indvidual Fundraiser. Two years ago, the Canadian Breast Cancer Foundation named Katherine a Local Hero. She was invited back to Toronto this May and was recognized as the captain of one of the top fundraiser teams in Ontario. She is terrifically proud of all of these achievements and thanks all who made a difference by donating and joining her team.

Every donation counts. Our goal this year has been reduced due to the pandemic. It is to raise $10,000 to bring us to a total of over $178,000.00 raised since 2013.  With your help, we can do this! Your continued dedication moves the Canadian Cancer Society closer to achieving its vision of creating a future without breast cancer!! All funds that I raise are dedicated to breast cancer research.

It will mean so much to me, if you are able to support her Team Katherine Butson on October 4, as I attempt to ‘walk’ the Run for the Cure.

THANK YOU SO MUCH FOR YOUR SUPPORT!!