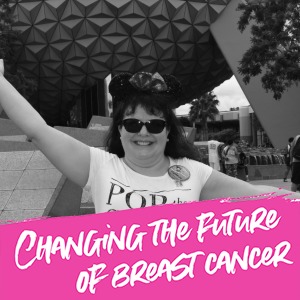 Thank you for reading my personal page. I’m participating in the CIBC Run for the Cure on Sunday, October 4 because breast cancer has changed my life forever.  While this year's event is virtual, I will be mapping out a 5 km route near my home for my team to run or walk. Afterall, cancer doesn't stop when there's a pandemic.

Over the last 7 years, Team Katherine Butson has raised $165,881.55 for the CIBC Run for the Cure while I worked through 3 misdiagnoses; an ultimate diagnosis of rare, aggressive breast cancer for which there has been, until recently, little research; chemotherapy and radiation treatments; receipt of diluted chemotherapy (!); two surgeries including one 7-hour major surgery; and, ongoing chronic side effects including Post Traumatic Stress Disorder!

I am terrifically proud of all of these achievements and thank all who made a difference by donating and joining my team.

Where am I now?

I remain on medical leave. After my treatments ended in October, 2013 I found myself with physical and cognitive side effects from the chemotherapy that have left me with chronic leg pain, cognitive damage, and neuropathy. While I have accepted that the leg/joint pain and neuropathy remind me I'm alive, I have found the cognitive damage humbling, humiliating, and difficult to accept. My emotional health spiralled downward and the effects of the trauma of being misdiagnosed several times, then diagnosed with a rare and aggressive breast cancer, followed by the receipt of diluted chemotherapy drugs finally took its toll on my. I began the struggle against depression and anxiety.

On June 22, 2015, our family lost my cousin, Carolyn, who passed away of a similar triple negative breast cancer. She was diagnosed a year after me and was doing well following her treatments. Suddenly, she was given two weeks to live and survived exactly 14 days. Her passing heightened the fear I already bore each day. When my father was diagnosed with stage IV prostate cancer, the reality of all I'd been through began to relive itself. In September, 2016, I was diagnosed with Post Traumatic Stress Disorder. On, January 24, 2018, I had the saddest day of my life. My father, who I'd become so close to during his battle against cancer, died. I miss him more than I could ever have imagined.

I receive medical care from several sources. I remain on medical leave as I work myself through therapy. It has been a struggle since the moment I found my lump. If you wish to read my diagnosis and treatment story (or remind yourself why it is so important to raise research funds), please read below.

Whether you read any further or not, I really hope you will consider making a donation to support my efforts this year.

Every donation counts. Your continued dedication moves the Canadian Cancer Society closer to achieving its vision of creating a future without breast cancer.

Please donate and support my fight against this frightening and humiliating disease by supporting my fundraising efforts.  Please help TEAM KATHERINE BUTSON SURPASS $185,000 RAISED IN JUST 8 CIBC Runs for the Cure and be part of my team's success!

Thank you for your care and support!  I'm still moving forward and leaving cancer behind!

The Day My Life Changed Forever

I found my lump on September 29, 2012 and was told I had a "minorly complicated cyst to be reviewed in six months". Despite receiving "good news", I wasn't at all feeling good about this lump. My doctor sensed my uneasiness and agreed to request the review to occur in three months rather than six. Unfortunately, her request was turned down by the hospital. Unbeknownst to me, my doctor called a radiologist friend and asked him to aspirate my cyst. I saw him two days later. Rather than aspirate the cyst, this doctor decided to take three biopsies. It was then determined that I had cancer. These two doctors saved my life. Sadly, I was misdiagnosed another three times before I was told that I had an aggressive, rare, and difficult cancer to treat and that I wouldn't have been alive to review the cyst six months from when I discovered it.

I had an unsuccessful lumpectomy in December, 2012 only to learn on January 9, 2013 that I still had cancer in my breast. The medical oncologist decided to move ahead immediately with chemo-therapy--something I dreaded as much as I fear cancer. I received 8 treatments in total over 16 weeks. These treatments were not guaranteed to save my life but the purpose of the drugs was to sweep my body of cancer cells, both detected and undetected, and prevent them from returning.

The night before my fourth treatment, I learned that I was the recipient of diluted drugs for each of my previous three treatments and became part of a class action law suit. I fear my health was compromised by this diluted drug fiasco in Ontario. I spoke to our then Minister of Health but her ministry did not serve the victims in this disaster.

I endured the loss of all of my hair and a increase in weight due to the steroids I had to take. I was diagnosed with diabetes as a result of those steroids among other facdtors. I watched the Katherine I enjoyed being disappear in the mirror in front of my eyes. I had to learn to give myself medication by injection that made me feel unwell. Giving myself the needles in itself was very upsetting to me as it made me face the fact that I was unwell. I didn't know from one day to the next how I would feel or what havoc chemo would cause me.

On July 2, 2013 I had an 7-hour surgery followed by 5 days in hospital. I was very sore, moved like a snail, and was dependent on others to drive me places, cook meals, and lift/carry/push/pull anything heavier than my purse. I learned then, too, that I would have to have 30 radiation treatments over a six-week period. The journey was long, arduous and beyond frightening.

I completed radiation treatments in October, 2013. I remain tired with chronic leg pain and memory problems due to the chemotherapy treatments. I'm striving to overcome the feelings of panic, fear, anxiety, and grief. I wish to have my former life back but have had to accept that I am forever changed. I know what this disease has done to my life and the lives of my son, fiance, mom, family, and friends.

After losing my father to prostate cancer, I feel more grief and anxiety. I miss my father so much and detest cancer and its evil affects. My PTSD symptoms were heightened while I watched what cancer did to my father who'd been so fit and athletic until we learned of his diagnosis. A huge void remains since my father's passing.

Team Katherine Butson was the idea of a wonderful woman, Stefanie, who I met through my son's school. I'm honoured that she would support me in this way. I'm touched by all who have joined my team and made donations. When I think about how breast cancer has changed me forever and the estimated 23,000+ women and men who will be diagnosed with breast cancer this year in Canada, it feels good to know I’m doing something, along with the other members of Team Katherine Butson, to change those statistics through my fundraising and by learning more about breast cancer.

You can make a difference too! With your support, the CSS will continue funding breast cancer research, education, awareness, advocacy and health promotion initiatives across the country, aimed to significantly reduce the burden of breast cancer in Canada.