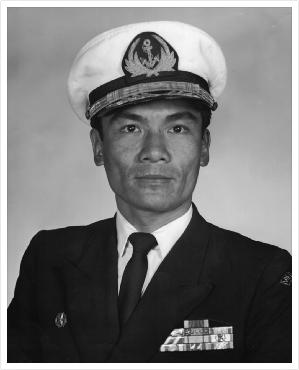 Our father was a strong, stoic naval officer who readily and proudly served his country for honour without the need for fanfare. Duty, decency, reliability, dignity, respect: these are all qualities that our father not only held in high esteem but practiced every day during his time on this earth. As a final act towards the end of his military career, he successfully evacuated hundreds of refugees out of Vietnam on his battleship. Countless lives have forever changed from this brave, and courageous deed.

He was a serious and disciplined man, but he could never resist the opportunity to laugh with friends and loved ones. He witnessed a lot during his lifetime: a world ravaged by war, which understandably influenced his views on the post-war world in which he grew up and, later, raised his own family.

Dad had four siblings and was only survived by a younger brother and an older sister. He was a widower for the last twelve years.

As a father of four boys though, he was often happiest when left to his own devices—whether it was tending to the garden, or fixing one of his electronic devices.

Dad was a simple man who demanded little from those around him, and who wanted only the best for his four children. As long as he heard regularly from us all—and saw us whenever possible—he was content.

It’s difficult to imagine him not being around and we are not sure how we will all cope. The grandchildren, Brandon, Ethan, Jonathan, Makayla, and Jayden, will miss him dearly.

Dad lived a long and happy life and only succumbed to ill health right at the very end. He was an imposing figure of a man, a sturdy and handsome character whose reassuring presence we all felt during difficult times.

As we gather to remember and commemorate his life, let us bid him farewell as we mourn the loss of a lively, dignified soul. A soul that brought joy and fulfillment to many, and whose legacy will live on forever.

All funds donated through this page will support the work of the Canadian Cancer Society.  The Society makes more impact, against more cancers, in more communities, than any other cancer charity in Canada.